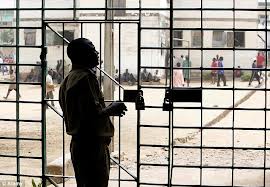 Unknown gunmen Saturday attacked the Minna Medium Security Prison, breaking into the armoury and carting away arms and bullet-proof vests as they released 276 inmates.

It was gathered by Thisday that three members of the gang of about 20 men, stormed the facility around 4:30pm and disarmed the Prison officials who were helpless as the gunmen carried out their operation.

According to a Prison official who spoke in confidence to Thisday, two notorious armed robbers and other 268 inmates escaped with the gunmen.

“We had 323 inmates in our various cells but we are left with only 53 in one of the cells. Our gateman was injured; they broke into our armoury and carted away weapons and bullet-proof vests.

“Where I took cover I saw Osama, one of the notorious armed robbers in the facility firing shots into the air. I want to believe his gang must have brought the gun and I saw him leading Ayo (Eze Ego), a dismissed Mopol out and other inmates,” the official said.

The men were said to have later snatched a Honda Car and escaped with it.

Eight out of the 276 prisoners have however been caught while the search for the remaining 268 is still ongoing.