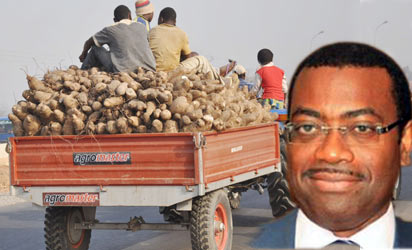 Minister of Agriculture, Akinwumi Adesina, has responded to the criticism of a former minister in the ministry, Mallam Adamu Bello, who said Adesina’s achievements are non-existent. The minister said that his achievements are rather unassailable.

“It will help greatly for Adamu Bello to point to the number of investments generated in seven years, whereas, within two years, under Adesina, Nigeria has attracted US$4 billion in private sector investments in the agricultural sector,” said Olukayode Oyeleye, an aide to the Adesina on behalf of his principal.

“Adamu Bello never told Nigerians the truth about his actual performance in office. Let him give details commodity-by-commodity, and let him state where and how this impact was felt. In 2004, under Adamu Bello, there was something interesting about growth rates in agricultural sector. His ‘perfect’ growth rate of 6.50% for crop production, 6.50% for fisheries, 6.50 % for livestock and 6.50% for forestry should raise eyebrows as this smacks of some form of cosmetic and fuddled growth statistics, an indication of some tinkering somewhere. Earlier in the year, Adamu compared his seven years in office with Adesina’s first agriculture year in 2012, relying on National Bureau of Statistics (NBS) alone. In doing so, he was one-sided in his analysis, seeking to confuse Nigerians with manipulative figures,” Oyeleye said.

Renowned economist and public affairs analyst, Prof. Pat Utomi, also described Bello’s criticism as laughable.
Speaking on Adesina’s achievements, Utomi identified the relationship the minster has been able to build between farmers and the government as very commendable.

“Today, they have blocked leakages in farmers’ access to fertilizers, provision of real-time information to farmers through making available handsets to farmers across the country. The current minister has also helped farmers in dry season farming,” he said.

Damian Ilenre of the Farmers Initiative in Benin said Adesina’s achievements were supposed to make Bello hide his head in shame.

“May be he needs to be reminded of the N14billion fertilizer contract scam that rocked his tenure for him to keep quiet,” Ilenre added.