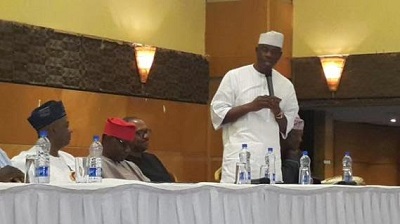 Ahead of the 2015 general elections, Vice President Namadi Sambo yesterday restated the resolve of the ruling Peoples Democratic Party, PDP, to claim Lagos State from the All Progressives Congress, APC.

Sambo stated this at a press briefing following the reconciliatory meeting to unite feuding gubernatorial aspirants in Lagos PDP.

The VP, who lamented that in spite of the large revenue accruing to the state government, the APC-led administration in Lagos had failed to deliver the dividends of democracy to the people, urged Lagosians to vote the PDP candidate, Mr. Jimi Agbaje, in the 2015 governorship election, promising that he (Agbaje) would bring an end to their suffering.

The meeting came on the heels of the protracted crisis that greeted the outcome of the PDP governorship primaries in the state. The immediate Minister of State for Defence, Senator Musiliu Obanikoro, who was an aspirant, rejected the result and took the party to court to compel it to cancel the exercise.

Speaking, Sambo said, “Lagos has for years been yearning for change from the burden of excessive taxation and squandering, you all know about. Today, people are leaving Lagos. The huge resources accruing to the state are used to the detriment of the good people of Lagos State. We are poised more than ever before to rescue Lagosians from the bondage and sufferings of taking back with the left hand and then, taking it away by the right hand.

“I will like to mention part of the tricks of the opposition where some governors put their pictures on projects in newspapers. In one of them, I saw the Lekki Deep Sea port. This is a PPP (Private-Public Partnership) programme where the Federal Government has large shareholdings with the Nigeria Ports Authority.

“The site of that Lekki Deep Sea port was the site where the Federal Government was to build a methanol plant. That methanol plant could not continue because we had spent over $200m on which has been converted to our share.

“Apart from that, the NPA is a 20 per cent shareholder in that port and then the private sector has the largest share. Some states are claiming that it is their projects. Our own pictures are there and we are confident that anything that we print and show you can be verified. I believe that with the coming of our new governor, we will have realistic development in Lagos State”.

The VP added that all the aggrieved participants had been appeased and have agreed to work for the success of Agbaje in next year’s elections.

Sambo said, “I am delighted to know that we are more than ever before united to form a common front in realising our objective of not only capturing Lagos but winning all seats at all levels in the forthcoming 2015 elections.

“The Lagos State PDP and indeed Senator Musiliu Obanikoro, Mr. Deji Doherty, Ambassador Tokunbo Kamson and Mr. Babatunde Gbadamosi who were our governorship aspirants have agreed to team up together and work to win Lagos this time around in 2015”.

Speaking at the meeting, Obanikoro affirmed that he had let bygone remain bygone and expressed the determination of the PDP to send the ruling APC in the state packing.

He said: “Despite inadequacies noticed in our primary (election), we all have agreed that Jimi Agbaje is our candidate…a lot of us must be ready to make sacrifices. We need to bear in mind that there is no winner or loser. All of us who went to the battlefront had returned as winners. And we are ready to confront APC in 2015”.

Speaking in the same vein, Agbaje said declared his readiness to lead chieftains and other members of PDP to victory in the 2015 general elections.

Agbaje promised President Goodluck Jonathan that he would deliver Lagos to the PDP and also garner votes for him next year.

Other aspirants who participated in the primary and who also expressed their willingness to work with Agbaje included Ambassador Tokunbo Kamson, Engr. Deji Doherty, Babatunde Olalere Gbadamosi and Mrs Modupe Chukwuike.