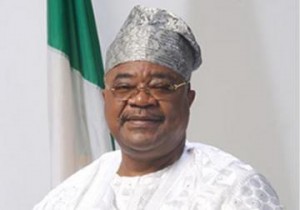 Former governor of Oyo State, Chief Adebayo Alao-Akala says he will contest the 2015 governorship election in the state and win.

He allayed the fears of his supporters over rumours that the party would pick a sole aspirant at the weekend.

“Let me state categorically that nobody can scare or intimidate us because we know our worth. I am not an Abuja politician, I am a grassroots operator. I know everybody by their name and calling in the party,” Akala said.

He said his experience spans over years of holding several leadership positions. “I have been a local government chairman, deputy governor and governor in this state, so Alao-Akala knows his worth.”

“No tension, do not panic, by the special grace of God, he has given us the next government in Oyo State. Though the path to that land seems rough, God himself will clear and show us the road to the promise land,” he prayed, adding that “before the end of the week, we’ll know the next line of action.”

He also assured his supporters that he remained a member of the PDP, although there are offers from some opposition parties.

“Yes, it’s true that some leaders of the opposition parties have been dangling offers before us, but I want to state here that none of them have been accepted,” he said.