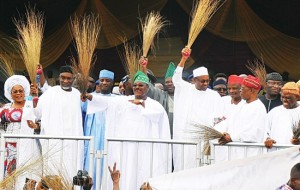 The All Progressives Congress (APC), yesterday, held governorship primaries across the country, to pick people who will fly the party’s flag at the 2015 governorship election.

In Lagos, Akinwunmi Ambode, the candidate said to be favoured by APC National Leader, Asiwaju Bola Tinubu was said to have won the primaries yesterday.

While Amosun won a return ticket in Ogun, his deputy, Prince Segun Adesegun declared his intention to run for the governorship on the platform of the Social Democratic Party (SDP). Adesegun told reporters at his lodge in Oke-Ilewo, Abeokuta that his decision to run is personal.

Amosun welcomed his deputy’s defection, describing it as one of the beauties of democracy that should be encouraged.