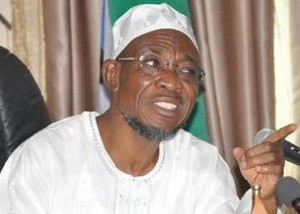 Governors of Osun State Rauf Aregbesola, yesterday said that Nigerians will enforce free and fair election in 2015, no matter what anybody tries to do to rig. He slammed the Peoples Democratic Party (PDP) as being a party that develops poverty.

The governor made the comments in Benin City during the Commissioning of 12 blocks of 31 classrooms at Asoro Grammar School Benin City, Annunciation Catholic College Irrua and Isua-Uzenema Road, Uromi. The projects were constructed by the administration of Governor Oshiomhole.

According to him, the sack of President Goodluck Jonathan from Aso Rock has been sealed by the developmental strides of the All Progressives Congress (APC) in its controlled states. He said that the Peoples Democratic Party (PDP) led Federal Government has lost focus and this has compelled Nigerians to vote the alternative party, which is APC come 2015 general election.

“As a matter of fact the only visible programme PDP does is development of poverty. They are poverty development party. PDP has pocketed our money to develop poverty. We must all continue to support APC until we change the government in Aso Rock in 2015,” Aregbesola said.

Speaking on the determination of the party to ensure elections go well in 2015, Aregbesola said; “We are determined to pursue the liberation of our people. We are going to enforce a free and fair election come 2015.

“They wear agbada and behave as if they own everybody, they are too proud. When we in APC have responsibilities we behave as if it is our life so we put in our best unlike them. Look at what Oshiomhole has done in Edo state, built roads, he has given future to the youths through education. APC is the only party that can take us out of poverty which the PDP has brought to our people,” Aregbesola said.

Also speaking, Oshiomhole recalled that before he became governor, the PDP administration in the state had killed public schools. He therefore expressed joy, however, that his administration has been able to bring life back into public schools through the renovation of schools in the three senatorial districts.