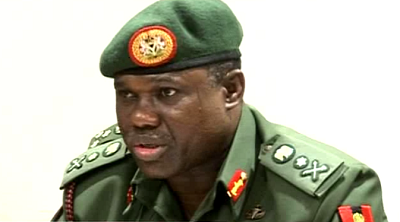 The Chief of Army Staff, Lt General Kenneth Minimah, has described a letter purportedly written by an army commander claiming that troops in the theater of war in the Northeast lack the necessary weaponry to engage the insurgents as a machination of the Boko Haram sect.

The viral letter, which was addressed to President Goodluck Jonathan by a military officer, who is purportedly the commander of the 103 battalion of the Nigerian Army, absolved army commanders of blame, saying it is not their fault that the defeat of the ‘so called’ Boko Haram has not been achieved.

He listed many other reasons including corruption, maladministration, lack of resources, and low troop morale as factors militating against a successful campaign to end Boko Haram’s deadly reign of terror in the northeast.

But Minimah, who spoke with journalists at the graduation ceremony of 151 junior officers from the Junior Course 78/2014 at the Armed Forces Command and Staff College (AFCSC) Jaji, Kaduna State yesterday, said the letter was anonymous and baseless.

“This is not the forum for that, but the letter is an anonymous letter, the officer whose name was used is presently serving, he did not write it. An investigation into the letter was completed long ago, over a month ago, but it just came out to public view recently. The officer did not write that letter because there is a serving officer in that name perhaps, it’s a Boko Haram element”, he said.