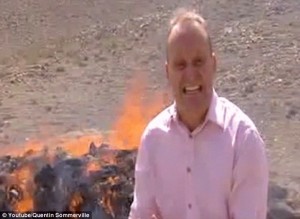 The BBC’s Middle East correspondent, Quentin Sommerville, has revealed the perils of reporting while standing next to a pile of burning heroin – getting high live on TV. Read more on News.Com:

Quentin Sommerville posted a link to a video showing him struggling to finish his broadcast after he got high and burst into drug-fuelled giggles. In the video, which he called ‘Don’t inhale’ and was filmed somewhere in the Middle East in the last year, Sommerville stands next to a huge pyre of heroin, opium and hashish.

He tries to keep a straight face as he begins his report in serious foreign correspondent mode, by saying: “Burning behind me is eight and a half tonnes of heroin, opium, hashish and other narcotics.”

But high on the fumes, he dissolves into drug-fuelled giggles, causing the cameraman to burst out laughing. Sommerville attempts to regain his composure and urges to the cameraman to try another take.

But the fumes prove too strong and he continues to fall into fits of laughter. The reporter shared the video with his Twitter followers as a Christmas present. “It’s been a year of bullets and bloodshed,” he wrote. “You’ve earned a Christmas laugh at my expense.”