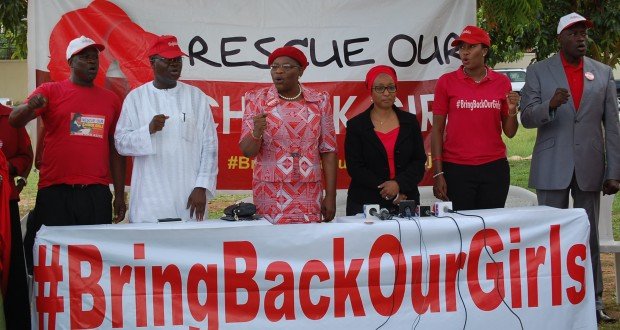 The #BringBackOurGirls group yesterday decried the reported abduction of another set of about 200 girls, women and children from Gumsiru village, in Borno State allegedly by members of the Boko Haram sect.

Speaking at the group’s sit-out yesterday in Abuja, one of the conveners, Abubakar
Abdullahi, expressed sadness that after the abduction of 276 schoolgirls in Chibok, the Federal Government and the security operatives could not protect Gumsiri, which is just about 20km from Chibok, from another unfortunate mass abductions.

She said: “What happened to the Chibok girls has repeated itself at almost at the same place and the same numbers. We have a serious issue. We have gone beyond the matter of our Chibok girls because of the constant kidnapping and killings. The nation state is fast disappearing and it is a dangerous trend. Citizens will continue to be there. The lasting legacy of our country is the citizens and we must not vanish. We want a viable Nigeria where everyone is protected. There is something about the nation state that is fast disappearing.

“It is sad that the kidnap in Gumsiru happened since Sunday and no one reported it until the international media broke the news for us to know what is happening”.

Meanwhile, chairman of the National Human Rights Commission, NHRC, Professor Chidi Odinkalu, has urged Nigerians to stand up against the impunity and uncaring attitude of the country’s political leaders.

“We need political and citizens pressure. We have to hold both parties accountable. What ideas do they have to bring insurgency to an end? The police are not doing what they are supposed to do. Army is doing police work. How do we get the politicians to account to us?” he queried.

According to Odinkalu, the next election is not about which of the parties is winning but how the country is presently faring.

“We should not be distracted by politics but make sure to ask them how we will come out of the challenge. We’ve missed the opportunity to forge a unity out of this challenge, but it is not late. We will continue to work towards making the country a peaceful one”, he said.