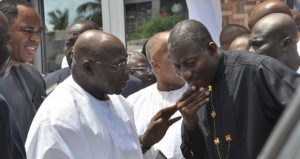 He accused Obasanjo of having done “similar or worse things while in office”.

“Some of us who have been watching for many years now, know that it is the kettle calling the pot black. Obasanjo did similar things he is accusing the incumbent of and even worse”, Osuegbu told Vanguard.

According to him, Obasanjo is now taking pleasure in criticizing and calling Jonathan names. “That is most unfair,” the cleric said.

Osuegbu noted that such criticisms had never come from any past President of the United States of America, saying real statesmen only advise the incumbents and nobody hears about it.

“They do not make noise if their advice is not taken by the incumbent. It is also noteworthy that no former President of the USA has ever castigated President Barrack Obama. This does not mean that Obama is infallible,” the Bishop said.

While past presidents of America respected the office of the President of USA as if their lives depended on it, “in our own case, a former president is at the fore front of criticizing, castigating and attacking an incumbent President with a view to destroying the system,” the Anglican cleric lamented.