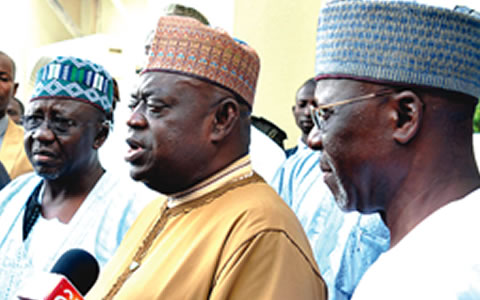 Governors of the 19 northern states have urged Nigerians to look closely at the activities of the Boko Haram sect in the Northeastern part of the country to ascertain if the terrorists were not engaging in a foreign war against the country.

The chairman, Northern States Governors’ Forum (NSGF) and governor of Niger State, Dr Mu’azu Babangida Aliyu, who made this observation, noted that insurgency is a social problem that is best tackled from an international perspective rather than domestic.

Speaking at the 7th general assembly of National Council of Traditional Rulers of Nigeria yesterday in Abuja, the governor lamented that the Boko Haram insurgency had taken a more complicated dimension and the authorities must look beyond the shores of Nigeria to properly situate the problem in order to be able to proffer a lasting solution to the problem.

“This may be the time for us to dig deeper to find out what we really have on our hands. Are we truly fighting Boko Haram insurgency, a criminal franchise or indeed a foreign war which we have unfortunately domesticated”, he asked.

The NSGF chairman also appealed to royal fathers to use their privileged positions and proximity to the people to come up with a holistic plan aimed at restoring the eroded cultural and moral values among Nigerians towards ensuring continued stability, unity and progress of the country.

“As traditional leaders, you can assist the development process in the society by involving yourselves in areas of education, poverty eradication and fighting illiteracy. You must be bold in upholding and promoting the highest standards of morality in the national interest”, he told them.

Gov. Aliyu further urged the traditional rulers to ensure that security and welfare form a major part of the deliberations.