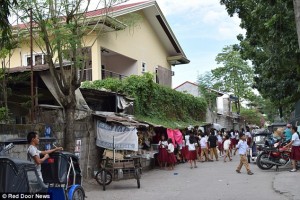 A notorious British paedophile has reportedly erected a house in the Philippines overlooking a primary school and allegedly lures pupils as young as eight-year-olds into his home where he abuses them at will. The UK Daily Mail has more:

Wealthy Douglas Slade, 73 – a founder of the vilified Paedophile Information Exchange which campaigned for child sex in the 1970s – has been repeatedly arrested for taking nude photos and molesting underage boys in the Philippines.

But despite being on bail for cases involving pupils from the Amsic Elementary School in Angeles City, he continues to take pupils into his home, paying them the equivalent of two pounds a time for sex acts and photos, neighbours told the Mail Online.

Widower Slade, who grew rich from a food business he set up after moving to the Philippines in 1985, donates money to the school which claims it has received no complaints about him from parents – even though its pupils are among his alleged victims.

He has repeatedly had child sex charges against him dropped and was caught on camera in an ITV documentary in 1995 boasting that he could bribe prosecutors and the families of victims to avoid being convicted.