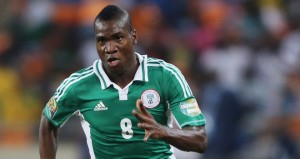 We already know that professional soccer stars these days are balling hard on their hefty weekly pay, especially the ones that play in the biggest leagues in the world.

One of such players is Super Eagles and West Brom striker, Brown Ideye, he recently joined the list of Nigerian celebrities who are proud owners of customized gold-plated edition of iPhone 6.

The former Dynamo Kiev striker, who was delighted with the new acquisition, took to Instagram late Thursday, December 4, 2014 to flaunt the 24K gold-plated iPhone 6 with his name, Ideye Brown written on it.

Brown Ideye made a £10m move to Premier League side, West Bromwich Albion on Friday, July 18, 2014 and has so far scored just one goal.