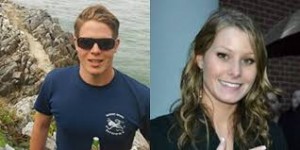 A 28-year-old Canadian man will travel the world with a woman named Elizabeth Gallagher. Just not the same Elizabeth Gallagher he used to date. Jordan Axani and his former girlfriend booked the three-week trip in May, which included stops in France, India, Italy and Thailand. But the pair broke up, leaving Axani with plane tickets booked in her name… Read more from Yahoo! News:

Wary of the hassle of changing names on tickets booked with several airlines, Axani put out a call on social media website Reddit in November for someone with the same name as his ex-girlfriend and a valid Canadian passport.

After worldwide media attention, Axani received thousands of responses, including from Nova Scotia student Elizabeth “Quinn” Gallagher, 23. Axani picked Gallagher, a homeless shelter volunteer, after talking with her on the phone and becoming impressed with her social conscience.

“It’s totally platonic,” Axani said from New York where the trip starts on Sunday. “Do I think we’ll become friends? Sure.”

Other responses were more odd. Axani said he heard from hundreds of people, male and female, who offered to legally change their names.

Axani has turned the attention into a charity called A Ticket Forward that aims to fund trips for underprivileged people.