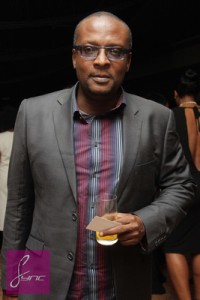 Remember I informed you last week that he would be releasing his list of the best Nollywood actors for 2014, a week after he dropped his list of best actresses.

The producer and annoying critique, Charles Novia has come up with his list for best actors.

According to Charles Novia, his list is not based on an actor’s fan base or popularity.

“For the crowd which believes that an actor’s popularity and fan base automatically means that such an actor must be on lists such as this, I say to you; get your heads out of your closets.

On this platform, all levels of professionalism are used as universal templates. I do not give a damn about the number of years an actor or actress has spent in the industry when I draw up such lists.

I am more concerned with areas of the actors body of work for the year and how impressive such was when placed under an artistic microscope.”

Sometimes we have an impression that stand-up comedians are just a stereotypical bunch and do not really act outside the ambits of their profession. But it takes a lot of self-training coupled with an inherent acting talent for a stand-up comedian to mimic different characters on stage whilst on his routine. Transiting to the Big Screen and exploring all the elements of acting in such a move calls for some balls on the part of such a stand-up act. And AY proves that he has balls.

In the movie, ‘30 Days in Atlanta‘, one was impressed with AY and his acting prowess. Bringing to life  and to the screen, a social media legendary character known as Akpos, one could see that AY went all out with the character. His jokes were on point. His deliberately obtuse responses to obvious situations were good and most of all, he maintained a verve and onscreen energy which was demanded from the character all through the flick.

That energy though might have been overdone in areas where he played to the gallery but such were quickly overshadowed by the brilliantly-plotted script in which Akpos shows us how a ‘Waffi’ neophyte epitomizes the average Nigerian who travels for the first time out of his country.

In ’30 Days in Atlanta’, AY didn’t have to act funny. He was funny. Having seen him act in the tepid ‘AY’s Crib’, his sitcom on television where all he seems to do is to deliberately or curiously bulge his eyes when rendering his lines, I was wary of what to expect in his movie. But he was well-researched for the role and had a great supporting cast which helped his delivery.

AY deserves the accolades he has been getting over that movie. Most of all, he deserves to be on my list this year.

‘A Mile From Home‘ is Tope’s breakout movie. Having won a few laurels on account of the movie for ‘Best Actor’, I was curious to watch the movie earlier on in the year and when I did, I was not disappointed by his characterization in the movie. He played a character  which requires the utmost physical interpretation for the role as well as layers of emotional demands and intrinsic internalization.

Where the dictates of the character needed him to deliver, Tope Tedela did. However, a trained eye could see that the young man still has a lot of work to do in some areas of his acting skills which a short course in an acting school would enhance if he so desires but that trained eye would also recognize that there’s a zeal within his talent which can be nurtured for the future.

It is heartwarming to see the new generation of actors coming all out to prove that talent is king, beyond good looks.For Tope Tedela, his talent may well take him places.

Lucky Ejim’s name might not ring much of a bell to many but his art clanged more than a Church Bell for me in 2014. The movie ‘Render to Ceaser’ in which Lucky plays a psychotic villain had a run at the cinemas earlier in 2014 and Lucky stood out for me as the man of the movie.

He was superb in his characterization and his articulation was brilliant too. Now, there is a difference between playing a villain and making the viewers accept that an actor is one. In this movie, Lucky blurred the lines and all through the movie, he was as good as they come in acting.

After his commendable outing in the 2009 movie, ‘The Tenant’, we had to wait for years for the Canada-based actor to return to the Big Screen over here. And he didn’t fail.

His name on this list would shock a lot of people who may not even know who he is. But he is an ACTOR and his artistry deserves my commendation. If anyone has watched ‘INVASION 1897‘ by Lancelot Imasuen, you would agree with me that Mike Omoregbe, who played the role of ‘Oba Ovoramwen’ was as brilliantly regal in the role as he was visually a sizzle in his interpretation.

His carriage and internalization for that role was quite an aesthetic delight and he did stir a lot of African cultural enthusiasts with his various levels of interpretation for that role. For a first timer on the big screen, I must doff my heart to this new entrant on the block. Actors such as this should not escape Nollywood’s radar in the present future.

Sadiq Daba is my number one actor in Nollywood this year. If his ascension to this list in the first place would shock anyone, I would gleefully go the extra mile to add an electrocution value to that shock. The Veteran Actor has perhaps given us his role of a lifetime and one which we will never forget in years to come.

I do not wish to believe that Uncle Sadiq’s role in ‘ October 1‘ could very well be a magnum opus to the industry, having being called out of a self-imposed retirement by Kunle Afolayan. It shouldn’t be. As the Colonial Inspector in ‘October 1‘, Mr Daba shows us all why tried  and tested actors of his professional ilk are still the unbeatable best.

One could appreciate that he personally put in a lot of research and hard work into his character and limited himself professionally to acceptable areas of believable acting, eschewing melodramatic dictates which other actors cast in that role might have been tempted to accede to.

His acting reached a powerful crescendo when in the last scene, he confronted the White Colonial officers. That was an awesome interpretation. In this age of harried and hurried actors who believe that they know it all, they can learn lots from actors like Sadiq Daba.

He gets my ultimate diadem for 2014. Congratulations, Sir.