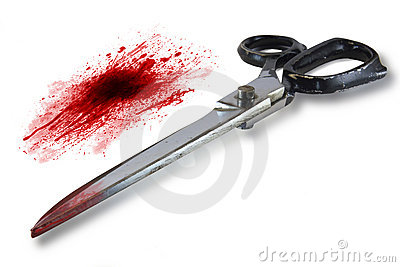 Policemen in Lagos have arrested a middle-aged woman, Comfort Tifase and her children, Olufumbi and Oluropo, for allegedly killing the father of the house, Moses.

The suspects in the incident which happened at their Block 285, flat 6 residence, Jakande Estate, Mile 2 area of the state, are now being interrogated by officers of the State Criminal Investigation Department (SCID), Panti, Yaba, Lagos.

The suspects, according to a report by Vanguard, had allegedly hacked Moses, who is based in Kano State, to death with a pair of scissors during a fight at their home.

The secret the suspects were keeping on the incident, which occurred in the early hours of December 6, 2014, blew open when they attempted to quickly bury the man after contacting a member of their church with the news of their father’s death and demanded his immediate burial, claiming he slumped and died.

The church member, who suspected foul play alerted the police in Festac. Divisional Police Officer, Ifeanyi Owo, led policemen to the scene and arrested the suspects with her children. The corpse had since been taken to the mortuary for autopsy.

Public Relations Officer of the Lagos State Police Command, Ken Nwosu confirmed the arrest to Vanguard. According to him, the suspects denied killing the man, but the policemen who visited the scene recovered a blood-stained pair of scissors in their apartment, while the entire apartment was in disarray showing some form of struggle.