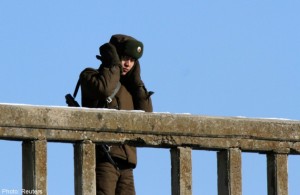 China on Friday arrested a Korean American missionary who is now being held near the country’s border with North Korea, signaling a toughening crackdown on Christian activists in the sensitive region. Reuters report:

Peter Hahn, 74, is being charged with embezzlement and counterfeiting receipts, his lawyer, Zhang Peihong, told Reuters. Zhang said he believed authorities were targeting Hahn because of his Christian faith and because he ran a non-governmental organization.

“The charges leveled against him are just excuses,” Zhang said.

Hahn, who ran a vocational school in the border town of Tumen, had been under investigation for months, along with several colleagues. In an interview last month, Hahn’s wife, Eunice Hahn, said the building that houses the school was a “mission base camp for our missionaries”.

Eunice Hahn said those under investigation among Hahn’s staff included two U.S. nationals and three South Koreans. Both Zhang and Eunice Hahn said Hahn had aided North Korean defectors more than a decade ago, but he was no longer doing so.

China has long worked to curb the flow of North Koreans who flee persecution and poverty in their homeland and illegally enterChina before going on to other nations, usually ending up in South Korea.