Chinese Man Steals Over 2000 Pair Of Pants, Hides Them In Ceiling 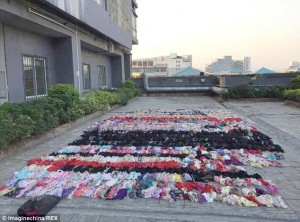 This dude from southeast China must be the best underwear thief in the whole wide world to have stolen more than 200 pair of pants while hiding underwear in his ceilings, read more according to Daily mail

The bra bandit of Yulin city, southeast China, has finally been snared after the ceiling of his apartment collapsed under the weight of his stash.

The bra bandit, named only as Tan, had hidden more than 2,000 pairs of pilfered pants and brassieres in the cavity above his bedroom in the Guangxi Zhuang Autonomous Region’s second-largest metropolis.

He had amassed the vast – and colourful – trove of lingerie by creeping into his neighbours’ homes and snatching their smalls when they were at work.