Coca Cola Company has been told to adhere to Nigerian laws and comply to the directives of the Consumers Protection Council, CPC. 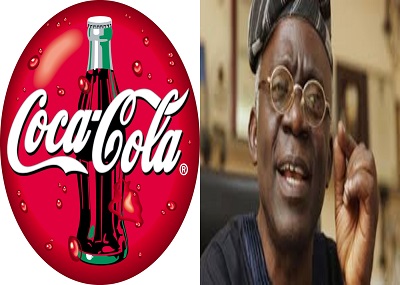 Lagos Lawyer, Femi Falana (SAN) made the call in a letter he addressed to the chief executive officer, Mr. Muktar Kent, calling on the company to respect international standards in Nigeria.

Part of the letter reads: “I am writing to express my serious concern about the failure of Coca-Cola Company to respect international standards in its manufacturing process and the refusal to allow or subject this process to inspection by appropriate authorities, in particular, the Consumer Protection Council of Nigeria (CPC).

“This failure and refusal to effectively comply with Nigerian laws and regulations is selective on the part of your company because I am fully aware that Coca-Cola will not breach international standards in its operations in the US or UK without serious consequences and punishment by the appropriate authorities in those countries.

“The following questions are pertinent: Why would the Coca-Cola Company expect not to be held responsible in Nigeria when its products contain rusty bottle crown corks, rusty cans and foreign particles? Are the health conditions of Nigerians less important?

“Why would Coca-Cola Company refuse to establish a Shelf Life Policy for their products in the country which clearly would help to facilitate the removal of expired products from the market?

“I contend that the double standard clearly being exhibited by Coca-Cola is not only unethical but also inconsistent with international standards such as the Guiding Principles on Business and Human Rights: Implementing the United Nations Protect, Respect and Remedy Framework. The Guiding Principles were endorsed by the UN Human Rights Council in June 2011.”

He also begged the company to make sure the show a greater level of responsibility by making sure that its products are not harmful to Nigerian consumers and to allow the CPC and other authorities to carry out their mandates.