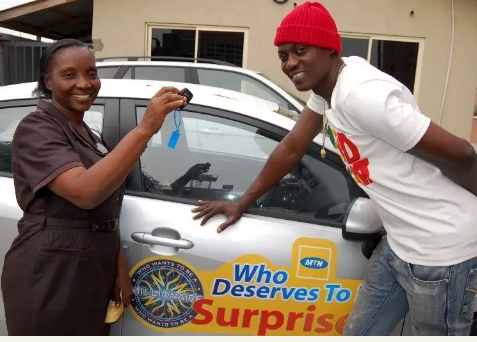 A corps member has won a house worth N50 million after playing the weekly TV game show, Who Wants To Be A Millionaire sponsored by telecoms company, MTN.

Special episodes of the TV game show tagged “Who Deserves To Be Surprised”, were aired on TV stations all over the country on the 21 and 28 December 2014.

MTN, in conjunction with Ultima Limited, had called on Nigerians to nominate whoever they feel deserves to be surprised during this yuletide. Such a person, they said, must have influenced or touched their lives in a positive manner.

According to the organizers, many nominations were received in this regard and it took a painstaking process to select the eight nominees with the most compelling stories, to come and have a chance of making it to the hot seat, not only to play for the regular star prize of N10million, but to also have a surprise chance of winning a house worth N50millon.

Of the eight nominees who were invited for the show, Omotola Akinsola, a Youth Corp member, and Iyabode Olasumbo Sodiya-Dawodu were the lucky two, who made it to the hot seat.

With both contestants at par, show host, Frank Edoho, ushered viewers into another anxious moment, as both Omotola and Iyabode were made to play the fastest finger game, so as to determine who wins the star prize of a N50m house.

Omotola was the fastest of the duo, to answer the N50m question.

She expressed her happiness and thanked MTN for surprising her in such a wonderful way.

“This surprise largesse is an encouragement for me to do more and to follow my passion to a point that will influence the youth, even at a global level,” Omotola said.

MTN also gave another package for the runner-up, Mrs. Sodiya-Dawodu, as show host, Frank Edoho, announced a new KIA car to be presented to her.
While expressing her joy at winning the car gift, an obviously elated Iyabode said it all came as a surprise to her, as she never envisaged it.

The star prize winner, Omotola Akinsola, is a Director at Jumpstart Academy, a Non-Governmental Organisation that supports and currently sponsors more than two hundred and fifty public secondary school students.

According to her, she recruits mentors from various universities within the country, to help in achieving her aim of motivating the youth in the society.