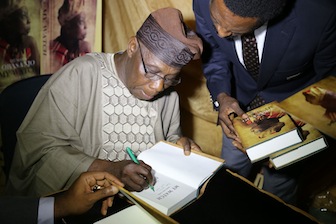 Justice Valentine Ashi, gave the order after former President Olusegun Obasanjo allegedly went ahead to publish his book titled “My Watch” in spite of a court order made on Dec. 5, restraining him from making the publication.

“I am of the view that the defendant having gone ahead to publish the book, he should therefore show cause within 21 days of the order served on him on why he should not be punished for contempt of court.

He directed that the book should be kept with the registrar of the court pending the determination of the suit.

Ashi also restrained the defendant from further printing, publishing or circulating the book “My Watch” which, he said “touches on the subject matter of the suit before the court”.

Earlier, counsel to Obasanjo, Mr Realwan Okpanachi, told the court that the book was published before the order was granted.

Okpanachi argued that the book had been in circulation since November and the order was made on Dec. 5.

The Counsel to Buruji Kashamu, Mr Alex Izinyo, SAN, submitted that the defendant`s application was a calculated attempt to deceive the court.

“My lord, the burden of proof lay with the defendant to show the court three volumes of the book”, he said.

The News Agency of Nigeria (NAN) recalls that the plaintiff Mr Buruji Kashamu, had earlier dragged former President Olusegun Obasanjo before the court for libel.

NAN further recalls that Kashamu alleged that the former addressed him as ex-convict in the letter he wrote to President Goodluck Jonathan titled, “Before it is too late”. (NAN)