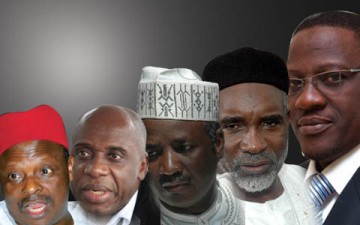 An Abuja Federal High Court on Friday struck out a suit filed by the Peoples Democratic Party, PDP, urging the court to sack its five governors who defected to APC.

Delivering his ruling, Justice Gabriel Kolawole, held that the suit’s originating processes were invalid because they were wrongly issued and served on the defendants.

“This suit is struck out as the originating summons has been declared invalid.

“It is preposterous, audacious and breath-taking for the plaintiff to argue that the defendants sued individually in personal capacity, could be served through the office of the party to which they defected.

“Having been described as governors of their respective states, who carry out most of their functions in their states’ capitals, it was wrong to assume that they reside or operate from APC headquarters in Abuja.

“Since APC is not a party in the suit meant to sack the governors, it is wrong to provide the APC’s address as the place where the governors could be served,’’ Mr. Kolawole ruled.

The PDP also joined the impeached Adamawa Governor, Murtala Nyako, whose name was removed from the suit shortly after his impeachment and the Independent National Electoral Commission (INEC) as defendants.

The party had through its counsel, Alex Izinyon, prayed the court to declare the defecting governors’ seats vacant, and order INEC to conduct elections to replace them.

Mr. Kolawole further upheld the argument of the governors’ counsel that the originating processes, issued by the Federal High Court, Abuja Division, meant for service outside jurisdiction ought to be endorsed.

He held that the PDP acted in violation of the provisions of Section 96 of the Sheriff and Civil Processes Act (SCPA) with respect to the serving of court processes.

The party ought to have applied for and obtained the court’s leave before engaging in substituted service, the judge said.

The News Agency of Nigeria reported that the party had served the originating processes on wrong address, which it claimed was the headquarters of the APC, which the court later set aside.

PDP again obtained an ex-parte order for substituted service of the originating processes through newspaper publication, which it published on July 3, 2014 in Thisday newspapers.

The governors faulted the procedure adopted by the PDP in serving them, arguing that the plaintiff failed to obtain the leave of the court to serve them through substituted means. (NAN)