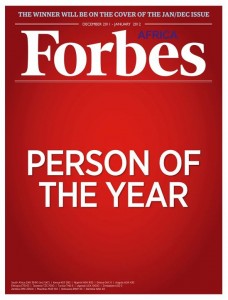 Nigerian industrialist and Africa’s richest man, Aliko Dangote has emerged as the Forbes Africa Person of the Year 2014.

Dangote was selected from a list that had other Nigerians like Chimamanda Ngozi Adichie and Arunma Oteh, Director-General of the Securities and Exchange Commission. Donald Kaberuka, President of the African Development Bank and Thuli Madonsela, South Africa’s Public Protector were the other finalists.

“Aliko Dangote is a lion of Africa in terms of business. He is second to none when it comes to investing in Africa, not just Nigeria. He is also a capitalist with a big heart. He puts his money where his mouth is and his foundation is a step forward for a man who wants to make a difference on the continent,” the panel of judges noted.

Dangote has now been nominated four times for the prestigious awards. Other Nigerians who have won the award are Highness Dr. Sanusi Lamido Sanusi (2011), when he was Central Bank of Nigeria’s governor, and Akinwumi Adesina (2013), Agriculture minister.

Dangote said he considered it an honour to be nominated for the award and thanked the organisers for the priviledge of choosing him as the “Forbes Man of the Year”.

“My thanks also go to my family for their unquantifiable support over the years; my diligent staff for their uncommon dedication to duty; my fellow Africans for believing in us; and my numerous friends across the globe, who have been a source of inspiration. I will also like to specially recognise and commend the other nominees for making it up to this stage. Their achievement is no mean feat, given the quality of the award.”

“Of course there are challenges, but which are not unsurmountable as long as we stay united in our resolve to overcome them. If we all join hands together, we can emancipate Africa from poverty, ignorance and disease – the triple obstacles to our development as a people,” Dangote said.