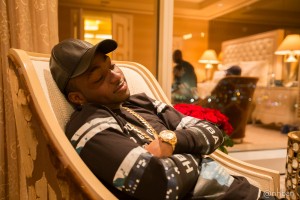 It like Davido is indirectly dissing the recently concluded Channel O awards after he was left out in the cold.

Last weekend, November 29, 2014, Davido, who was nominated in 5 different categories at the Channel O Music Video Awards lost out in all, a development that he didn’t just expect but which also makes him feel hard done by.

A week later now, Nigeria’s Tayo Faniran emerged as one of the finalists of the Big brother Hotshots and after being tipped to win the contest, Tayo sadly also lost out to Idris from Tanzania.

Moments after Idris was announced the winner, Davido took to Twitter to write: ‘and they cheat again lol.’