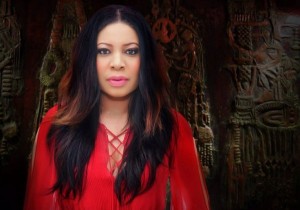 It’s common knowledge that there are very few successful marriages in the Nollywood industry. Some that got married were forced out of their homes or had to voluntarily leave. Some marriages didn’t even last a year before packing up.

Veteran star actress Monalisa Chinda is a divorced mother of one. She and her ex-husband Dejo Richards split due to the fact that he was allegedly physically abusing her.

The actress during the interview with Encomium Magazine on December 5, 2014 openly admitted that her venture into owning a magazine was indeed a mistake, but she’s now the host of her own TV show called You and I With Monalisa.

When questioned about her love life and supposed love affair with Lanre Nzeribe, Monalisa coyly avoided a straight answer saying “Yes, I am in a relationship with my talk show, and I want all my fans to look out for the show, when it kicks off in January, 2015″.

She did however say that as a woman in her 40s she has every intention of remarrying but cannot be precise about the time.