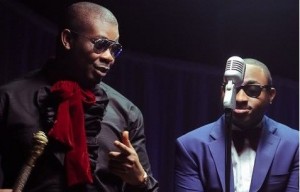 After starting the year like the superstar that he is, Davido seems to be losing some acceleration as he loses out on yet another set of awards.

However, Don Jazzy has thrown his weight behind Davido, who emerged the biggest loser at the just concluded Channel O Music Video Awards.

Davido was one of the acts with the highest numbers of nominations with a total of 5 to his name and hopes were high that the HKN lead act would clinch a couple of the awards due to his recent form of winning most international awards this year; unfortunately, Davido lost in all 5 categories.

Jumping to his defence, Don jazzy tweeted later: ‘My most gifted video award is Aye by Davido sha. #MyOpinion. He definitely owned 2014. #Okbye’.