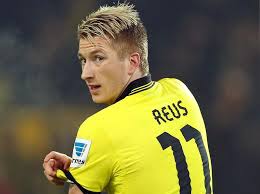 Borussia Dortmund’s general manager Hans-Joachim Watzke is optimistic Marco Reus will remain at the Signa Iduna Park next season, despite interest from Bayern Munich and a host of English clubs.

Reus is the hottest topic of transfer speculations in the German Bundesliga at the moment, with the likes of Premier League powerhouse like Chelsea, Liverpool, Manchester United and Arsenal also in his chase.

Real Madrid are also said to be keen on the attacker, who has a clause in his contract permitting him to leave for a set fee at the end of the current campaign.

Bayern chairman Karl-Heinz Rummenigge claimed several months ago that he knows the value of that clause to be €25million (£19.9million).

However, interested clubs will have to do more to convince the 25-year-old as the Watzke has insisted he is happy at his native Westphalia club.

“I believe that fundamentally Marco would love to stay here because he loves the city and he loves Borussia Dortmund,” Watzke told Stern magazine.

“But I’m sure the people who are interested in him moving will provide him with other arguments.”

Dortmund have seen Mario Gotze and Robert Lewandowski move to Bayern in the past two years, and they are eager to avoid losing another key player to their bitter rivals.

And Watzke was adament the financial implications of another big-money sale would have no impact on Reus’ future.

“That would mean we would be able to invest an additional 20 million in the team than we can now.”