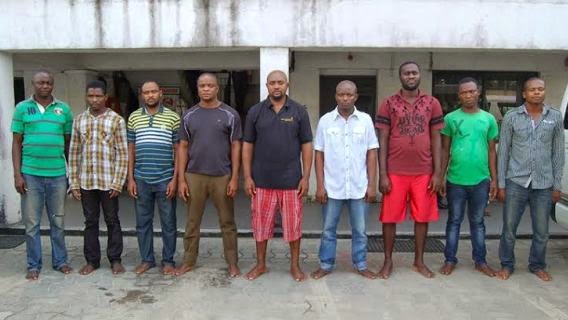 A statement issued by the Head, Media and Publicity of the EFCC, Wilson Uwujaren, stated that the accused persons were intercepted aboard MB SKYE by men of the Joint Task Force (JTF), Operation Pulo Shield on November 14, 2014 in Brass waters, close to Nigeria Agip Oil Company (NAOC), Bayelsa State while transferring suspected crude oil from two vessels, MT CERGEN-D and MT ELIMINA, which were under investigation for alleged oil theft.

The accused persons pleaded not guilty to the charges.

One of the counts read; “that youClement Oguntuwase , Joseph Obie , Ifeoluwa Albert, Adams Amzat Akokhia, IsaacNdidi Chima, Rafiu Momodu, Rasaq Mahmud, Godwin George, Thomas Daniel anda vessel, MB Skye and others now at large on or about the 13th and 14th November, 2014 at Brass within the jurisdiction of this Honourable Court did without appropriate licence deal in Petroleum Products to wit: about 388.53 Metric tonnes of Crude Oil siphoned from two vessels namely; MT CERGEN-D and MT ELIMINA which you conveyed in MB SKYE and thereby committed an offence contrary to section 1(17) (a) and (b) of the Miscellaneous Offences Act CAP M17 of the Revised Edition (Law of the Federation) Act 2007 and punishable under the same Act”.

The prosecuting counsel A.I Arogha, in view of their plea, asked for a date for the commencement of trial but the defence counsel, A.A Adetunji, orally presented a bail application and prayed the court to grant the accused persons bail.

In his ruling, Justice Akanbi granted the prayer of the defence counsel by releasing the accused persons on bail in the sum of five Hundred Thousand Naira (N500, 000.00) each and a surety in like sum, who must reside within the jurisdiction of the court.

The case was adjourned till March 11, 2015 for commencement of trial.