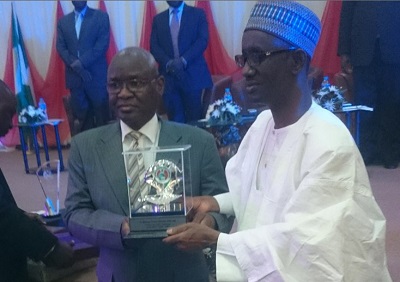 Eleven years after he was unceremoniously removed as Chairman of the Economic and Financial Crimes Commission, EFCC, Mallam Nuhu Ribadu, yesterday, returned to the commission’s office, but this time, to pick up an award for a job well done.

Ribadu, who was the pioneer chairman of the EFCC, used the occasion to declare that he had no regrets for the work he did while he was in office.

The Peoples Democratic Party, PDP, governorship candidate for Adamawa State, was among the 306 workers of the EFCC honoured by the Chairman, Ibrahim Lamorde, at the anti-graft’s maiden “Rewards and Recognition” ceremony at the commission’s academy in Karu, near Abuja, recently.

Ribadu said he had no doubt that the commission remains the best hope-inspiring institution in Nigeria.

He said: “We believe we have clean hands and, therefore, we can clean the dirty faces of Nigerians”, and admonished staff of the commission to be steadfast in their commitment to the fight against corruption, describing the EFCC as his family.

According to him, “the EFCC remains my family and no matter how long, your good efforts will be rewarded. I urge you all not to worry about distractions but to continue to do your job no matter the circumstances and you will surely be rewarded”.

Ribadu also used the occasion to shower encomiums on former President Olusegun Obasanjo, Mr. Femi Falana (SAN), General Aliyu Gusau and late Gani Fawehinmi for believing in the vision of the EFCC as a vehicle for ridding the nation of economic and financial crimes.

In his remarks, Chairman of the EFCC, Lamorde, described the ceremony as 11 years in the making. He said that right from inception, the commission took a conscious decision to be different, thereby throwing a challenge to chart a totally new path in law enforcement in Nigeria.

“Consequently, we have set a very high standard for our staff, not only at the point of entry, but also in the discharge of their duties and for them to continue to stay employed with the commission”, Lamorde said.

He boasted that the EFCC that only a few were willing to give a fleeting chance of succeeding 11 years ago, had gone on to become an institution of reckoning in law enforcement, with operations, partnerships and influence stretching across and beyond the African continent.

At least 306 staff members of the EFCC were honoured at the elaborate ceremony for serving the commission meritoriously in various capacities.