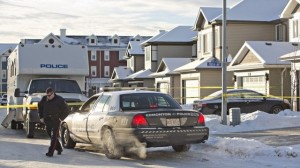 Two children and six adults have been shot dead in the Canadian city of Edmonton as a man carried out what police reffered to as a “senseless mass murder” linked to “extreme domestic violence”. BBC reports:

The gunman is also believed to have killed himself. Police are not looking for any other suspects. The incident unfolded in three different locations in Edmonton, in the western province of Alberta. Seven bodies were found in the same house, police chief Rod Knecht said. Two “very young” children are among the dead, Mr Knecht said

Edmonton City Police Chief Rod Knecht: “It is a tragic day for Edmonton… as we all come to terms with the senseless mass murder of eight people” He said it was the worst mass killing in Edmonton since six people were killed in 1956.

“It appears to be an extreme case of domestic violence gone awry,” he told a press conference, describing the killings as “planned and deliberate”.

“This series of events are not believed to be random acts, and there is no risk to the broader public. These events do not appear to be gang-related, but rather tragic incidents of domestic violence.”

Police say that the gunman used a stolen 9mm handgun and later killed himself at a restaurant north of Edmonton. They have only released the names of one of the victims and have not detailed the relationship between the gunman and his victims.

Mr Knecht said that the man who committed suicide had a criminal record going back to 1987.