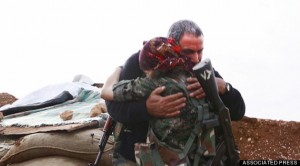 Kurdish female fighters have been playing a major role in helping to defend the Syrian town from an onslaught by the Islamic State extremist group on the front lines of the battle for Kobani. Pervin Kobani, the 19-year-old daughter of a farmer, being one of them met something shocking on the battlefield. AP reports:

Pervin Kobani, the 19-year-old daughter of a farmer, is one of them.

She is part of a team holding an eastern front-line position that comes under regular attack from the extremist fighters, who have been trying to seize the town since mid-September.

The Islamic State group has declared a self-styled caliphate in areas under its control in Iraq and Syria, governing it according to its violent interpretation of Shariah law. The Kurdish men and women fighting in Kobani are determined not to lose the town to the extremists.

An exclusive report shot by video journalist, Jake Simkin inside Kobani late last month offered a rare, in-depth glimpse of the destruction that more than two months of fighting has inflicted on the Kurdish town in northern Syria by the Turkish border.

It also illustrated what life is like for fighters like Pervin, who says she doesn’t really have dreams beyond the present.

“We must save our love for Apo, and Kurdistan and our martyrs,” she said, referring to Kurdish rebel leader Abdullah Ocalan, whose group has been fighting Turkey for Kurdish autonomy.