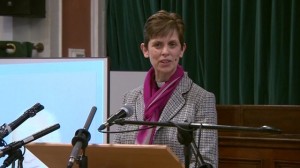 The first female bishop for the Church of England has been announced as Reverend Libby Lane, just a month after a historic change to canon law. BBC reports:

She will become the new Bishop of Stockport, a post that has been vacant since May.

Mrs Lane has been the vicar at St Peter’s Hale and St Elizabeth’s Ashley, in the diocese of Chester, since 2007. The general synod voted to back plans for female bishops in July and formally adopted legislation on 17 November. The appointment will end centuries of male leadership of the Church and comes 20 years after women became priests.

Mrs Lane was ordained a deacon in 1993 and a priest in 1994, serving her curacy in Blackburn, Lancashire. Since 2010 she has also held the role of Dean of Women in Ministry for the diocese of Chester. Speaking at Stockport town hall the new bishop, whose role was approved by the Queen, said it was a “remarkable day for me and an historic day for the Church”. “This is unexpected and very exciting,” she said.

“I’m honoured and thankful to be called to serve as the next Bishop of Stockport and not a little daunted to be entrusted with such a ministry.” Prime Minister David Cameron congratulated Mrs Lane and said: “This is an historic appointment and an important step forward for the Church towards greater equality in its senior positions”. Mrs Lane will be consecrated as the eighth bishop of the town at a ceremony at York Minster on 26 January.

Share
Facebook
Twitter
WhatsApp
Previous articleThrowback Photo Of Pastor E. A. Adeboye As A Mathematics lecturer At University Of Ilorin, 1979
Next articleFlavour Puts His Dogs To Sleep By Playing Guitar
- Advertisement -