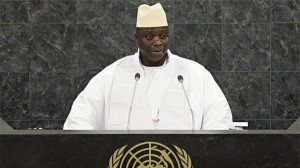 Gambia’s foreign minister Bala Garba Jahumpa has said that the West African country would sever all dialogue with the European Union  (EU) and rejected what he said were attempts by the bloc to use its aid budget in forcing Gambia to revoke a tough new law against homosexuality. Reuters report:

Foreign Minister Bala Garba Jahumpa said that President Yahya Jammeh – a former military officer who seized power in a 1994 coup – would not allow foreign nations to use aid to impose policies on his government.

Jammeh signed legislation last month that introduced the crime of ‘aggravated homosexuality’, making it punishable in some cases with life in prison. The definition covers cases such as homosexual relations with someone under the age of 18, or a person with HIV having homosexual sex.

The crackdown comes as the European Union is due to decide in December whether to release 150 million euros ($186 million) worth of development aid to Gambia, a matter that has been up for debate because of its poor human rights record.”Gambia’s government will not tolerate any negotiation on the issue of homosexuality with the EU or any international block or nation,” Jahumpa told state television.

“We are no longer going to entertain any dialogue with the EU either directly or through sub-regional, regional and international blocks to which we are members.” Jahumpa said homosexuality was ‘ungodly’ and against African tradition, and said Gambia would work with other countries on the continent to oppose it.