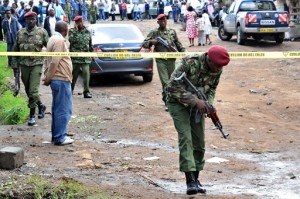 An unknown assailant reportedly threw a grenade into a cafe in a town in eastern Kenyan on Wednesday, wounding two people in a series of violence that followed two attacks by Islamists that killed more than 60 people in less than two weeks. Reuters report:

Sporadic acts of violence are not uncommon in Garissa and other areas along the border with war-torn Somalia but tensions have been heightened since the Somalian al Shabaab Islamist group claimed two attacks further north in the Mandera area.

In the first attack on Nov. 22, Islamist gunmen hijacked a bus and killed 28 non-Muslim passengers near Mandera town. On Tuesday, militants killed 36 non-Muslim quarry workers in the same region.

Al Shabaab has said it is punishing Kenya for sending troops to Somalia to join other African forces battling the Islamist group there.