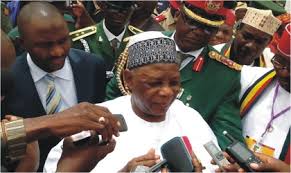 The Minister of Defence, retired Gen. Aliyu Gusau, on Friday reassured the military of government continued support in the ongoing war against terrorism.

Gusau, who gave charge at the burial of two Air Force officers at the military cemetery, in Abuja charged them to exhibit selflessness, courage and commitment in prosecuting the war.

The minister urged the military to emulate the courage of the late officers, who he said, gallantly paid the supreme sacrifices by confronting the insurgents boldly while serving their fatherland.

“We must remind ourselves that no sacrifice is too big to secure the future of our children.

“Those gallant men lost their lives in the course of a noble duty; their sacrifice shall not be in vain. Good men will die but death cannot kill their name.

“The name and memory of Ubong Akpan and Zabesan Hosea will not die in our heart. They shall be written in gold in the history of this nation and humanity at large”.

He assured the families of the late officers that government would assist them.

“At a time like this, no word of comfort can sufficiently console or heal your grief, however, take solace in God, who is the greatest comforter”, he said.

The Chief of Defence Staff, Air Marshal Adesola Amosun, assured that the military would do its best to win the war against terrorism.

Amosun said that the terrorists were against the nation’s sovereignty, adding that all resources must be mobilised to defeat them.

Earlier in sermon, Wing Cmdr. Okenwa Okoye, the Chaplain at Air Force headquarters, urged Nigerians to ask for God’s intervention to overcome the country’s challenge.
Okoye, quoting from 2 Timothy 3:1-5, reminded the people that the world was in its “last days” when many “dangerous things” like terrorism facing the nation were expected as prophesied. (NAN)