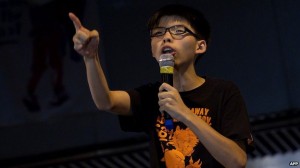 Hong Kong Chief Executive CY Leung has warned pro-democracy activists who has been protesting since the past month not to return to the streets following the latest outbreak of violence. BBC was there:

His comments come after some of the worst clashes between protesters and police since the pro-democracy demonstrations began two months ago.

Police armed with pepper spray, batons and water hoses cleared activists from Lung Wo Road in the Admiralty district.

In another development, prominent student leader Joshua Wongannounced on Monday that he and two others were beginning a hunger strike to demand renewed talks with the Hong Kong government.

“Living in these troubled times, there is a duty. Today we are willing to pay the price,” the students said in a statement.

Student leaders opened talks with government negotiators in October but they failed to achieve an agreement and discussions have not been resumed.