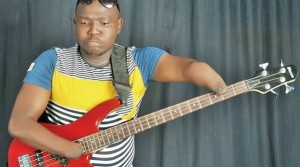 This is one of those inspirational stories that makes us realize that life gives us opportunities to make ourselves better, no matter how bad things might seem.

I want you all to read the touching story of Simeon who against all odds is living a life of purpose even if most people in his shoes would have given up to a life of begging on the streets.

Simeon Djagbo has become not just a fine musician but an inspiration to many. He is a University graduate of DELSU and is now running his Master’s programme.

With determination and great courage, Djagbo has risen above his deformity and is enriching his life, buoyed by a strong belief that God has a reason for letting him be born without palms and fingers.

At the tender age of 5, Simeon’s musical talent had become noticeable. He says his musical talent is “a gift to showcase God’s wonders and be a blessing to others who feel hopeless.”

“My church brought a man to teach the guitar to others. I was in the drum section just watching as he was teaching a lady to play a progression on a particular song. I watched the way the lady’s fingers were moving on the strings and I was capturing it in my head. When she dropped it, I picked the guitar up and played it exactly the way she was taught and everybody was shocked, because I was not taught how to play it. Although, I was always sneaking to play the guitar because some concerned people felt I would injure myself. I kept at it and became better. I feel God divinely directed me to the guitar.”

“My parents never gave up on me and treated me like a king; they supported me financially and prayerfully. I wanted to enroll in a primary school, but the school administrators rejected me because they felt I could not write. They also felt that my physical defect would scare off children from the school. My parents got information about a school owned by a white woman, St. Lukes Nursery and Primary School in Warri, Delta State. From there I moved to Sure Success College, Warri for my secondary education. I later gained admission into Delta State Univer­sity, Abraka where I read Library and Information Science. For the mandatory National Youths Service Corps (NYSC) scheme, I served in Okrika Local Government Area, Rivers State and I am presently running my Masters programme in the same University,”

“I want to say the greatest challenge that a man can have is a handicapped mind and not physical challenges. I believe that God who created me like this has a reason and a bigger and better plan that will take me to an expected end. Any challenge I face is a process to fire me up to become a better per­son in this world.

No one is physi­cally disabled except your mindset is. And I believe that it does not limit you from being who you are destined to be in life. Everyone is born with at least a talent. It is your duty to discover and make use of it. Like the Bible says in Proverbs 18:16 ‘A man’s gift maketh room for him and bringeth him before great men.’ Trust me, no one has any excuse.”

“The fact that Jesus lives means I can face tomorrow. I wake up praising Him because He owns my future, and I know I am a great child of destiny. I am inspired knowing that I am a friend of God and that even the angels are envious of me. God is alive and I see that the future is so bright for me.

“I hope to become one of the most sought after gospel bass guitarists both in Nigeria and abroad. I also want to be a blessing to people and put smiles on their faces,”.