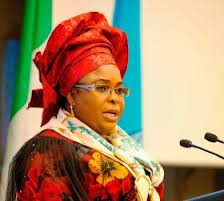 The First Lady, Dame Patience Jonathan, on Tuesday, said there was no truth in media reports that she was imposing governorship candidates on some states ahead of the 2015 general elections.

The president’s wife said she could not have performed such a role because she was neither an elected official of state nor a Peoples Democratic Party functionary.

She made the clarification in a statement by her Media Assistant, Ayo Adewuyi.

Mrs. Jonathan was specifically reacting to a media report that some party leaders and stakeholders in Ebonyi State had decided to defect to the All Progressives Congress because she (first lady) insisted that the Deputy Governor of the State, Chief Dave Umahi, must be the party’s flag bearer.

Adewuyi said it was absurd that any person would assume that Mrs. Jonathan would make such a request considering the fact that she had continued to preach peaceful conduct for all aspirants before, during and after elections.

The statement, therefore, described the report as another attempt by mischief makers to attribute their self-induced political travails to wife of the president.

The statement read in part, “Let us state once again that the First Lady is not an elected official of state, neither is she a party functionary.

“She, therefore, recognises very clearly her place in the scheme of things.

“Let it be known that the First Lady has no hand in the selection of the party’s candidates in any state and definitely not in Ebonyi.

“If anything, she has continued the gospel of peaceful atmosphere for the conduct of 2015 elections.

“She believes the elections can only be conducted in a peaceful atmosphere and the aspirants must be alive to contest and win election”.