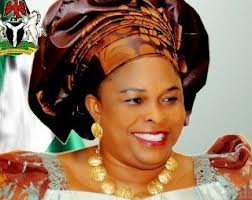 The First Lady, Patience Jonathan, on Friday urged Nigerian women not to vote for any politician who would not carry the womenfolk along in his or her administration.

Mrs. Jonathan said this in her address at a civic reception organised in her honour by the Ohuhu clan, her maternal home in Umuahia North Local Government Area of Abia State.

She urged women to vote massively for President Goodluck Jonathan.

“He has met the 35 per cent Affirmative Action for the appointment of women into political positions in the country.

“The President has done a lot to tackle the developmental needs of the nation, in spite of the challenges and opposition against his administration,” Mrs. Jonathan said.

She appealed to women to take advantage of their population to re-elect the President for a second tenure.

“Let us take advantage of our numerical strength to vote for the re-election of the President, because more Nigerian women had been appointed to political offices by Jonathan’s administration than past administrations.

“We have women that are capable. We can contribute our quota to the development of Nigeria.

“We women are suffering but God will see us through”, she said, adding that the president had helped to alleviate the plight of Nigerian women.

Mrs. Jonathan thanked the Ohuhu community for the honour done to her, saying she would all her life cherish the title of “Ngalari Ohuhu’’ (a golden daughter of Ohuhu) conferred on her.

Governor Theodore Orji of Abia, who was guest of honour at the event, said his administration had received tremendous support from President Jonathan and his wife.

Mr. Orji described the reception as well-deserved, saying it was a rare privilege for a community to produce the wife of the President.

He described Abia as predominantly PDP, assuring that its people would vote massively for Jonathan during the presidential election.

The President-General of Ohuhu Welfare Union, Godwin Okengwu, said the people were happy to be related to Patience Jonathan.

Mr. Okengwu described her as “an exemplary woman’’ and a worthy ambassador of Ohuhu who had contributed immensely to the development of the area and Nigeria in general.

He described the event as “a home-coming” for Patience Jonathan, saying the community “is proud of her”.

He said the title would be peculiar to Patience Jonathan and would not be conferred on any other woman in the community.

The PDP governorship candidate in the state, Okezie Ikpeazu, commended the First Lady and assured her that Abia would vote massively for the re-election of President Jonathan.

The highlights of the well-attended ceremony also included the ground-breaking for the construction of a N500 million ultra-modern Ohuhu Civic Centre by Patience Jonathan.

The ceremony was attended by prominent politicians from Abia and Anambra, including Arthur Eze, who donated N250 million towards the construction of the Civic Centre.