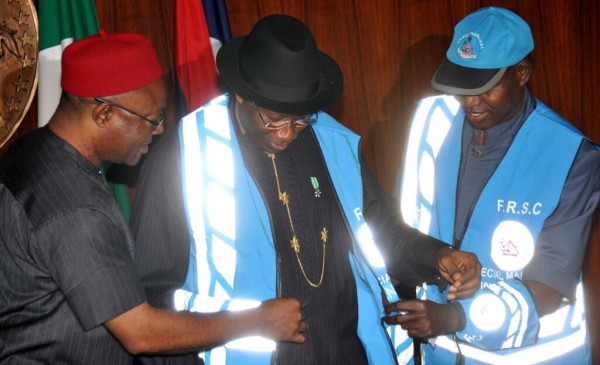 President Goodluck Jonathan has lamented high rate of road accidents in the country. He said that is why the federal government was embarking on massive road construction to reduce the menace.

He noted that road crashes had placed enormous costs on road users, especially wanton destruction of lives of most productive segment of the nation’s population, the youth, as well as economic loses. But said it was disturbing that while the roads were getting better, rate of crashes and fatalities were on the increase.

The president made the comments at the 12th National Summit of Special Marshals, organised by the Federal Road Safety Corps (FRSC), with the theme: “Transforming Nigeria through volunteerism: The Nigerian special marshals strategy.”

Jonathan, who was represented by the Secretary to the Government of the Federation, Senator Anyim Pius Anyim, said: “The idea of special marshals in the campaign against road carnage is a novel one, particularly considering the magnitude of over 15,000 members assisting in the effort to ensure safer roads, because road safety is not a responsibility that should be left only to regular marshals.

“It requires the assistance of all well-meaning Nigerians. It is gratifying to know that the special marshals, as operated in Nigeria is the largest volunteer force in Africa and has been playing critical roles in the campaign to ensure the success of road safety in the country. This idea is worthy of emulation, not only for African counties, but the world at large.

“My personal involvement in the campaign, as demonstrated through my investiture as the grand patron of special marshals in July, is a testimony to my preparedness to personally lead the FRSC, in conjunction with other critical stakeholders, to collectively make the nation’s roads safer.

“People must realise that road crashes don’t just happen, they are caused by either omission or commission of drivers. Therefore, they could be prevented if sufficient measures are put in place and people readily obey rules and regulations guiding the road use.”

The president assured that his administration was working towards meeting the target of the Accra Declaration, which tasked member countries of the African Union to achieve a 50 per cent reduction in the rate and fatalities of road crashes by 2015.

“We are equally committed to full implementation of the five pillars of the United Nations Decade of Action for Road Safety 2011-2020.

“Government has continued to demonstrate political support to issues of road safety in Nigeria. This can be measured by government’s increased funding of the corps, which improved from N8 billion in 2007 to N30 billion in 2013, while the staff strength increased from about 13,000 in 2009 to 19,000 in 2013,” he said.

Speaking on the importance of the summit, Corps Marshal and Chief Executive of FRSC, Mr Boboye Oyeyemi, said it would provide opportunity to critically analyse issues of road safety, imperatives of efficient enforcement and rescue operations among others.