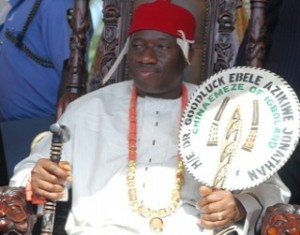 Osun State governor, Rauf Aregbesola has blamed President Goodluck Jonathan for Nigeria’s economic woes. According to him, the current state of the country was as a result of mismanagement by the Jonathan administration.

“Politics aside, the truth about Nigeria is that the people currently managing it at the centre, care less about the people but themselves,” Aregbesola said at a book presentation to mark the 50th birthday of a frontline rights activist, Comrade Amitolu Shittu.

He noted that the country’s economy has dwindled to the point of near collapse under Jonathan.

Nigerians, he said, must therefore decide to change the situation and save the country from the selfish leaders.

He expressed the need for pro-democracy activists in the country to as a matter of urgency work strategically towards ensuring the victory of the All Progressives Congress (APC) in the 2015 presidential election.

“Wherever you find PDP, you will find misery, poverty, under-development. We must remember that the encounter of our people and experience especially in the South West geo-political zone have never brought anything positive. Our people had associated their party with misfortune and till today, they remain the same,” Aregbesola said.

Speaking earlier, Shittu slammed former Military Head of State, Ibrahim Babangida for openly supporting Jonathan. According to him, only corrupt Nigerians like Babangida would support Jonathan, who apparently had no good plans for the country.

Share
Facebook
Twitter
WhatsApp
Previous articleSee A New Deadly Record Of Ebola [statistics]
Next articleEverton Goalkeeper Howard Out for Up to Six Weeks with Injury
- Advertisement - Ad ==> TRUTH FINALLY OUT! Discover how a young Nigerian graduate now makes a consistent 40k per week doing a legitimate online business. You too can start yours now, click here!!!