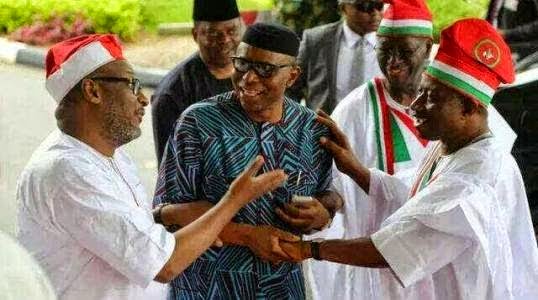 Governor Olusegun Mimiko of Ondo State has described the emergence of President Goodluck Jonathan as the Peoples Democratic Party candidate in the 2015 presidential election as well deserved.

The candidature of the President, who was endorsed as sole candidate of the party in the primaries, was ratified by the 2,812 votes cast at the party’s convention held in Abuja on Thursday.

In a statement by the state commissioner for information, Hon. Kayode Akinmade, Mimiko said the peaceful process that produced Mr. Jonathan as the party’s flag bearer was a testament to his popularity and recognition of his achievements since becoming the President of the country.

While assuring President Jonathan of victory in Ondo State, Mimiko said, “The president has over time demonstrated his genuine love for the country and would do everything humanly possible to ensure that it remains an indivisible entity.

“The time is now for Nigerians to rally round President Jonathan to achieve his dream of a better Nigeria. His achievements in the area of Agriculture, education, health, transportation, road rehabilitation, energy and the economy are laudable and should continue so that he can realise his dream for the country.

“Since it was the will of God that the president assumed office in the first place, the same God who ensured he won the party’s candidature without any rancour will ensure that he is elected as the next President of our dear nation next year”.