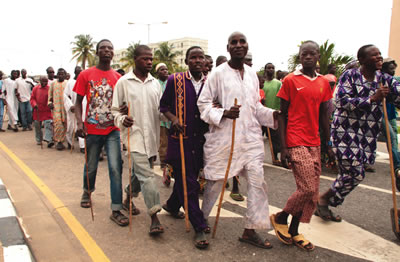 Alhaji Abba Sufi, the Director-General of Kano State Hisba Board, said the state government had empowered 250 street beggars in various trades this year.

Sufi, who disclosed this to the News Agency of Nigeria on Sunday in Kano, said some of the beggars were trained on various skills for them to become self-reliant.

He said the government had selected another batch of 250 beggars for empowerment programme in 2015.

“The skills we gave them included selling of recharge cards as well as provisions to their various localities.

“For those selling recharge cards, we gave them N50, 000, generator, umbrellas and handsets, among others”, he said.

Sufi warned that anyone caught begging along the streets, after being assisted by the government, would be prosecuted.

“Those found guilty will be sentenced to three months imprisonment or a fine of 10,000 or both.

“We carry out operations in all the streets in the state in order to ensure Kano is street begging free, hence the government’s decision to support them”, he said. (NAN)