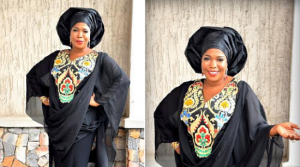 It seems like a lot of celebrities aren’t going to accept defeat in their political primaries.

One of them is Kenny Saint Best (KSB), she has come out to say that the only reason why she lost out at her party’s primaries despite being the best candidate was because the party leaders wanted Lai Mohammed’s son for the position she was running for.

She said this to Encomium Magazine when she was asked about the party’s primaries, here her: –

It is the leaders, we did what our leaders wanted. I aligned to their will. It was Lai Mohammed’s son they wanted. It does not mean I cannot be put elsewhere to serve, it is not that I lost.

The other guy has never been a legislator too. We are all new. We have a lot of new faces in APC than anywhere else.

I congratulate the winner. I learnt he came out four years ago and he was told to step down for Ikuforiji. We are gathering experience and we will gather more experience.

It is not a bad situation. I was able to convince people that I could do it. I was able to add my voice. It is even a feather to my cap now. There is no hard feelings about it. I was able to come out for what I believe. It is just a seat in the House of Assembly. I can still get a seat elsewhere. I have passion for women and youths. I went through all the processes. I was the best candidate in my constituency. At least, I am a politician now.