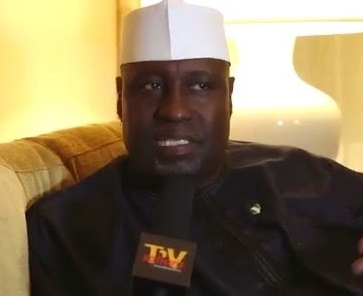 Coordinator of the All Progressives Congress (APC) presidential candidate in Jigawa State, Farouk Adamu Aliyu, has described Governor Sule Lamido as a failed presidential aspirant, who is apparently envious of Muhammadu Buhari’s public record and achievements.

Aliyu, who was reacting to the recent attack on Buhari by Lamido, accused the governor of trying to influence decisions within the APC, including that of the candidate for Jigawa Central Senatorial seat, but failed because members of the party remained united.

Lamido had at the weekend accused the presidential candidates of the Peoples Democratic Party, PDP, and APC, President Goodluck Jonathan and Buhari respectively, of heating the polity, saying that if anybody dies during the 2015 elections, both candidates should be prosecuted at The Hague.

But Aliyu said: “I am aware that Lamido attacked Buhari and my person over the weekend and at their earlier stakeholders’ meeting. The truth is that Lamido is an angry person. He is a failed presidential aspirant who wanted to be PDP presidential candidate but chickened out because of EFCC.

“I can understand his anger with Buhari, but let me remind him that in all circumstances, Buhari’s pedigree is not comparable to Lamido. I am surprised that Lamido has refused to campaign for Jonathan who he went and endorsed in Abuja. To me that’s hypocrisy”.

Aliyu alleged that Lamido called him “to say that we should not allow Hon Nakudu to get the APC ticket for Jigawa Central Senatorial district, and we did the exact opposite by giving the ticket to Nakudu”.

In his reaction, the governor’s Special Adviser on Youth and Students Affairs, Umar Danjani Hadejia, said Lamido never told anybody that he wanted to contest for PDP’s presidential ticket in the first place, hence, the issue of a failed presidential aspirant does not arise.

“It is laughable to describe Lamido as a failed presidential aspirant. We and other well-meaning Nigerians are the ones that mounted campaign for Lamido to stand for presidential election come 2015. Even Buhari recognised the quality of leadership displayed by Lamido in Jigawa.

“Faruk himself bought form to contest for the 2015 APC governorship primaries in Jigawa and later failed to do so. Does that qualify him too as a failed aspirant? Lamido has transformed Jigawa, whether anybody likes it or not and he will remain a reference point in the state and beyond”, he said.