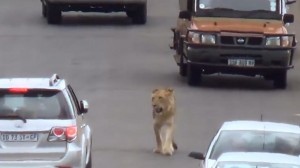 John McAdams, who runs The Big Game Hunting Blog, said he was traveling along a busy stretch of Kruger National Park road well known for hippo sightings when he noticed traffic was stopped on an upcoming bridge.

“Sure enough, a young male lion was crossing the bridge and stopped all traffic in both directions. We sat there for over 30 minutes observing and photographing the lion at a safe distance,” McAdams said of the November incident.