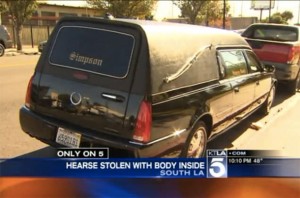 A pastor’s wife says a vehicle was stolen from outside a Southern California church ahead of funeral services with a casket and probably a body ready to be buried inside. Seee more from

Shirley Little, the pastor’s wife, says the director called ministry friends for help when he saw the hearse was missing.

Little says family members driving to the funeral had been notified and stopped the hearse four blocks from the church.

KTLA-TV reports that police detained the man, whose mental condition will be evaluated.

Little says the hearse was returned and the funeral was only delayed by 30 minutes.