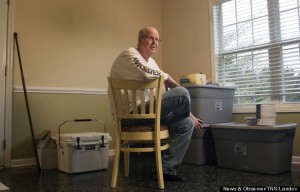 A North Carolina man alleged that authorities ruined his life when they mistakenly arrested him on child sex charges, which had cost him his reputation, his home and his job of more than 23 years. Huffington Post reports:

“I served my church, was working a career and overnight it was all gone,” Tommy Keith Wall told The Huffington Post.

Wall, 50, of Willow Spring, was freed from the Harnett County jail on Oct. 30, after more than three months behind bars on charges of first-degree rape of a child, first-degree sex offense against a child and felony conspiracy. His release, according to the dismissal statement, was prompted by further investigation of the case, which revealed the “wrong person” was charged.

“It was horrible,” Wall’s attorney, Fred Webb, told HuffPost. “He was charged with one of the most horrible crimes and that can never be recovered from. Not only was he charged, but it was plastered all over the Internet.”

The events that led to Wall’s arrest were set in motion in early January, when detectives began investigating Bailey Joe Mills, 33, after an exchange of inappropriate Facebook messages with a 12-year-old girl.