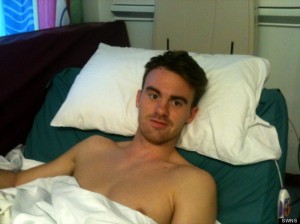 A lot of guys would like to be Matthew celebrity, but for a few months, a man named Rory Curtis thought he was Matthew McConaughey after bouncing back from comer. The Huffington Post  reports:

It happened in August, 2012, when Curtis, 25, was in a car accident near his home in Redditch, Great Britain. He spent six days in a coma after suffering a brain hemorrhage in the crash. When Curtis came to, he was so dazed and confused that he was convinced he was McConaughey.

“I cannot remember much but I know in my head I thought I was Matthew McConaughey,” he said, according to the Daily Mail. “When I went to the toilet I went to look in the mirror and I was shocked because I didn’t look like him, I didn’t know what I was looking at. Then slowly over time it eventually clicked and I thought ‘He is an actor, what am I on about?'”

Still, there were times before his release in November, that Curtis would be in the hospital wishing he could go back to making movies. “I was convinced I was him and that I had his good looks as well — I know it was hopeful thinking really,” he said, according to the paper.

Besides thinking he was McConaughey, something else strange occurred to Curtis in the accident’s aftermath: He could suddenly speak French fluently.