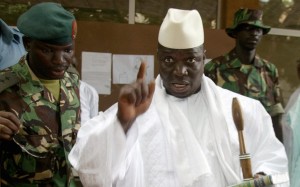 The European Union has withdrawn millions of euros of funding from Gambia as a result of its poor human rights record, thereby leaving the mainly Muslim West African nation to rely on donors from the Middle East for development projects. Reuters report:

The shift in soft power is of concern to Western governments in a region where Islamist militancy in northern Nigeria and northern Mali is fueling instability, diplomatic sources said.

“West Africa has a large, impressionable youth population that have no access to jobs. Their loyalty might be bought through aid, sometimes by those sympathetic to the Islamification of the region,” said one diplomat.

Gambia was criticized by the United Nations Human Rights Council in October for restricting freedom of expression and numerous other rights violations.

In November, Gambia cut off dialogue with the European Union after President Yahya Jammeh returned from a visit to Qatar.

The EU decided unanimously in December that systematic abuse of human rights amounted to contravention of the Cotonou Agreement, an international accord that stipulates that aid can be delivered only in return for progress in human rights.